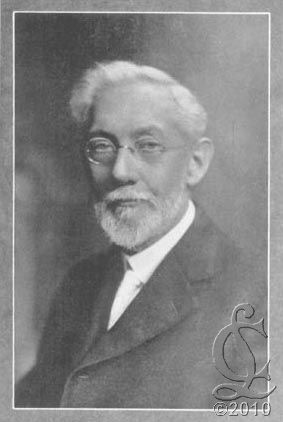 American Baptist pastor, Bible teacher, and writer, Clarence Larkin was born October 28, 1850, in Chester, Delaware County, Pennsylvania. He was converted to Christ at the age of 19 and then felt called to the Gospel ministry, but the doors of opportunity for study and ministry did not open immediately. He then got a job in a bank.

When he was 21 years old, he left the bank and went to college, graduating as a mechanical engineer. He continued as a professional draftsman for a while, then he became a teacher of the blind. This last endeavor cultivated his descriptive faculties -- something God would later use in him to produce a monumental work on dispensational theology. Later, failing health compelled him to give up his teaching career. After a prolonged rest, he became a manufacturer.

But he was not happy. He felt that God wanted him in the Gospel ministry. When he was converted he had become a member of the Episcopal Church, but in 1882, at the age of 32, he became a Baptist and was ordained as a Baptist minister two years later. He went directly from business into the ministry.

His first charge was at Kennett Square, Pennsylvania; his second pastorate was at Fox Chase, Pennsylvania, where he remained for 20 years. He was not a pre-millennialist at the time of his ordination, but his study of the Scriptures, with the help of some books that fell into his hands, led him to adopt the pre-millennialist position. He began to make large wall charts, which he titled, "Prophetic Truth," for use in the pulpit. These led to his being invited to teach, in connection with his pastoral work, in two Bible institutes. During this time he published a number of prophetical charts, which were widely circulated.

When World War I broke out in 1914, he was called on for addresses on The War and Prophecy. Then God laid it on his heart to prepare a work on Dispensational Truth (or God's Plan and Purpose in the Ages), containing a number of charts with descriptive matter. He spent three years of his life designing and drawing the charts and preparing the text. The favorable reception it has had since it was first published in 1918 seems to indicate that the world was waiting for such a book.

Because it had a large and wide circulation in this and other lands, the first edition was soon exhausted. It was followed by a second edition, and then, realizing that the book was of permanent value, Larkin revised it and expanded it, printing it in its present form. Larkin followed this masterpiece with other books: Rightly Dividing the Word, The Book of Daniel, Spirit World, Second Coming of Christ, and A Medicine Chest for Christian Practitioners, a handbook on evangelism.

Larkin, a kind and gentle man, deplored the tendency of writers to say uncharitable things about each other, so he earnestly sought to avoid criticisms and to satisfy himself with simply presenting his understanding of the Scriptures. Though he did not intend to publish his own works, the Lord led in that direction. During the last five years of his life, the demand for Larkin's books made it necessary for him to give up the pastorate and devote his full time to writing. He went to be with the Lord on January 24, 1924.